Hey everyone, Here is something cool that I have been working on that I think you may enjoy. 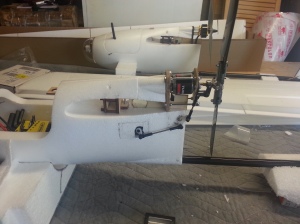 So, I had been pondering how to make an inexpensive variable prop. I was thinking about using a heli head from a hk450 or perhaps a tail rotor. I eventually saw a post on DIYdrones.com where a guy was using a tail rotor from a HK500 (can’t find post). I got inspired and found a HK600 tail rotor has the same shaft diameter as the turnigy G10 I use on the techpod. this is what I have come up with. 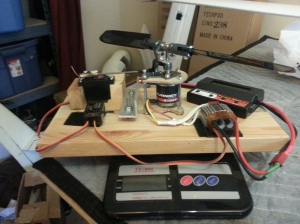 I measured 15 degree max forward pitch and 12 degree reverse pitch. at 15 degrees forward pitch it drew 40 amps from a 3 cell lipo and puts out just under 5 lbs thrust.

After the motor was secured, I cut out a mount for the pitch servo. Then I cut a hole in the foam so I could attach the servo mount to the techpods rear fuselage brace. I grabbed a bell crank from the local hobby shop and mounted it to the rear brace as well.

I have the techpod mostly assembled and should have the batteries for it later today. I hope to be able to start test flying over the weekend. If everything works out well, I plane on offering this as an mod kit for the techpod.

This site uses Akismet to reduce spam. Learn how your comment data is processed.